Move down. Other versions.

More and more people and specialists (including politicians) are abandoning the idea that we can control global warming without greatly diminishing our prosperity. Based on this reasoning:

Therefore, only a massive reduction in global production and consumption can prevent our doom. This implies that the size and nature of these processes must be the subject of a structural socio-economic policy. Such regulating and limiting means a profound political change.

A restrictive policy should always answer two main questions: What are you going to restrict? And who are you going to restrict?
The first concerns the prioritization of production, that is, what is superfluous? The second concerns the repartition of pain over the population. For each of these two socially explosive bombs, there is an effective rule of thumb for dismantling them:

But how to make society to address such a deep socio-economic remedy?
In my opinion - and I will limit myself here to commenting on the situation in France - an important first step would be that the various forces already working on this issue better align their argumentations.

Let me start with Terre des Liens. Their recent decision to put more attention on making small-scale farming more accessible to young people is a great step forward, but it must be embedded in a broader vision of the future that provides a response to the environmental conditions that will threaten the lives of French people in the decades to come.
As it happens, recently (February 7, 2022), such a broader vision for a low-carbon French economy was conceived here in France by the Shift project of Jankovici and his coworkers. The name of the plan: Plan de Transformation de l'Economie Française: PTEF. I consider this plan (see also this analysis of national plans) to be the world's first truly serious emissions reduction plan. Why?

It has two very strong features: (a) detailed step-by-step planning, and (b) a more substantial focus on structural transformations than on pure energy transition.
Here are some of the key strategic elements of this plan:

The main strategic choice behind all this is, of course, to bring together the functions of "housing", "producing", "transforming", "buying", "trading", "relaxing", "recycling," and "repairing," and thus, within the framework of land-use planning (= making space accessible), to work on integrating all these functions into the living spaces to be created. Indeed, an essential dimension of the PTEF transformations is that they all converge towards a change in lifestyle that can only be achieved if the French population moves closer to agricultural production. To put it briefly: an economy of proximity to primary sources..

Some argue for a similar policy for the sake of post-urbanization, degrowth, or livelihood, and others - like XR, Soulèvement de la Terre, and the ZADs - for the sake of the ongoing deterioration of all essential living conditions.

[Soulèvements on facebook: : The ecological catastrophe is not to come, it is already there. We will not bring ourselves to contemplate it, helpless, isolated and locked in our homes. The causes and those responsible surround us, they are the ones who participate in the destruction of the soil: creeping concreting, polluting industries, and monopolization of food-producing land by agro-industry. We want to specifically target and block these perpetrators. We also want to occupy and cultivate the land that has been taken from us. Because everything suggests that it's now or never we have decided to throw our forces into battle.] 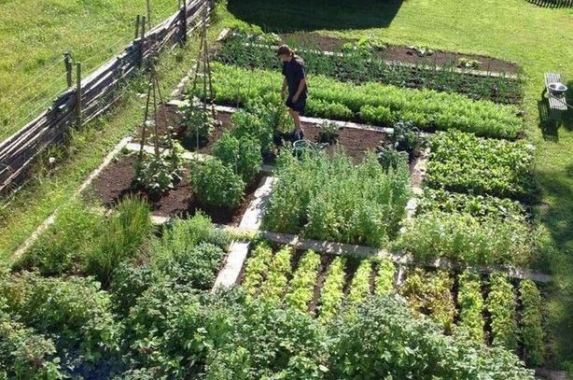 The fact that all these lines of reasoning tend towards the same final conclusion is only very reassuring. This implies for Terre des Liens that from this future perspective - i.e. a transformed France, more anchored in the world of farming - they can militate much more strongly in favour of a much wider access to an agricultural living space for young people. Major transformations are needed. Integrate cities more with the land by moving a large proportion of young adults into eco-neighborhoods where they can live independently in small houses/dwellings on large plots of land, while producing food and energy. 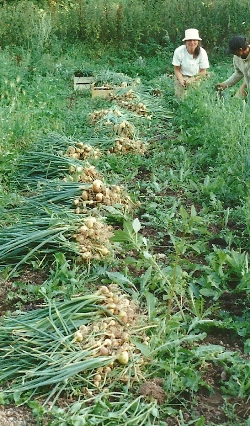 The size of the plot is therefore decisive in this transformation. Enough land generates enthusiasm and ties. The secret of the success of the dacha districts around Russian cities is entirely based on this key element.

To trigger this transformation, farmland will have to become the main controllable parameter of our collective decision making. Two questions are key:

So policy-makers must work very hard to synchronize the answers to these two questions. How might this be done?

The key idea that needs to emerge among politicians is that they recognize that tackling climate change is only possible by initiating an intensive two-way interaction between land and citizens, and that this reciprocity can only be made stronger by regulating access to land locally. Thus, a localized regulation of agriculture is required to trigger the shift to a local low-emission economy.

To make this happen, two administrative proceedings must first be dismantled. Namely:

Subsequently, a new law will have to give the municipalities the leeway to organise themselves the access of young adults to local livelihoods - such as land, housing, workshops, etc.
With this step, we simultaneously create a local decision-making dynamic to trigger a self-sufficient circular economy. Because impenetrable access to land is currently the bottleneck blocking any transformation to a low-emission lifestyle. Widening that bottleneck opens up a world of possibilities.

Prepare some kindling and light it

A logical first step would be to focus plans for new neighborhoods not on people with lots of money, but on young adults who are highly motivated to live emission-free through partial self-sufficiency (food and energy). Regarding this second type of projects, there are already numerous initiatives underway in Europe, both on the demand side

On a national and European level there is a rapid development of the movement of lightweight hamlets and tiny houses. The latter is a social initiative advocating voluntary simplicity through the habitation of small houses. It is linked to the "zero waste" movement, oriented to the practice of consuming less and better, avoiding waste though recycling, recovering, valorizing, and throwing away as little as possible. So: a simple way of life, more autonomous, prioritizing being over showing.

and on the supply side

Many European municipalities are already in reaction to these movements by providing space for innovative forms of housing with concrete plans for implementation. See, for example, this description of some 20 German municipalities that are preparing large areas of land for the construction of micro-houses with a permanent residence permit ('Erstwohnung').

Some European projects may be large in scale, but in terms of design they fall short of what is essential for the persistence of huge datscha districts around Russian cities, namely: sufficient land per plot. 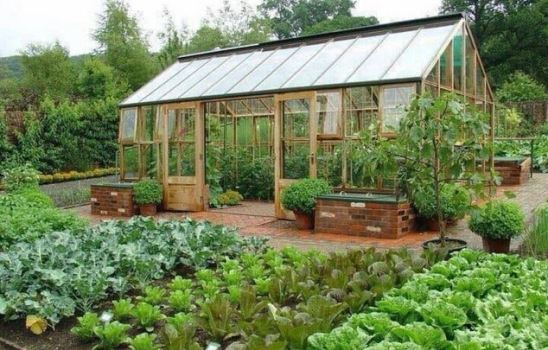 In order to grow fruit and vegetables, at least 1500 square meters must be available per family. It is precisely through this amount of land that people are lifted to the scale at which they can regain control of their lives, and work out a low-emission lifestyle for themselves. 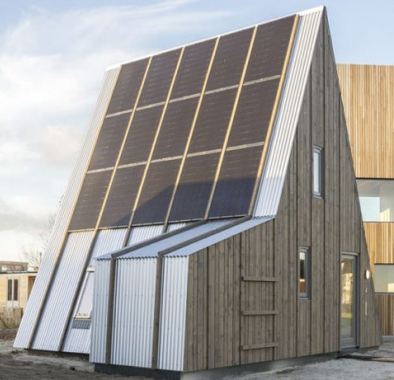 Let's suppose that it is decided to divide every available hectare for eco-neighborhood (in an urban plan) into 5 building plots of 2000 m² each, equipped with sewer, electricity and water connections, and to distribute them at a rather low price ‒ because there is almost no need for roads inside the plots ‒ to young people who want to (let) build a (or two in case there are children) micro-house (< 40 m²) on solid ground (and not on trailer) and use it as a main residence, then 5 families could live there at an affordable price (< 50.000 euros) and with very low emissions, because they will live much more outdoors than indoors, and their pursuit of comfort and ease will be strictly limited by other values and goals. By imposing an A-frame model (see photo) on the buyers, for example, it is possible to maximize the surface area for installing photovoltaic panels.

Another deficiency of the current initiatives is that the normal settlement (of citizens and farmers) expansion plans are simply continuing. These should stop. They are destructive and are not the kind of fire starters (kindling) with which to jump start a low-emissions economy of proximity.

The vast majority of current so-called eco-neighborhood projects in France will result in very expensive houses (> 200 000 euros) that can be bought and lived in only by families with two good salaries, or by rich retirees. But this group of people can already afford to install low-emission systems in existing homes, and it is a group that (if they move into the eco-neighborhood) will continue to have a GHG-rich lifestyle in other aspects of life (in terms of transportation, travel, entertainment, working elsewhere, and luxury). The installation (with public support) of young farmers must also be stopped. The common practice of pipelining young adults into industrial agriculture (and astronomical debts) through donations must be abandoned. For every farmer who stops without a successor, land around a village or town can be freed up through reparcelling and then allocated to eco-dwellers. 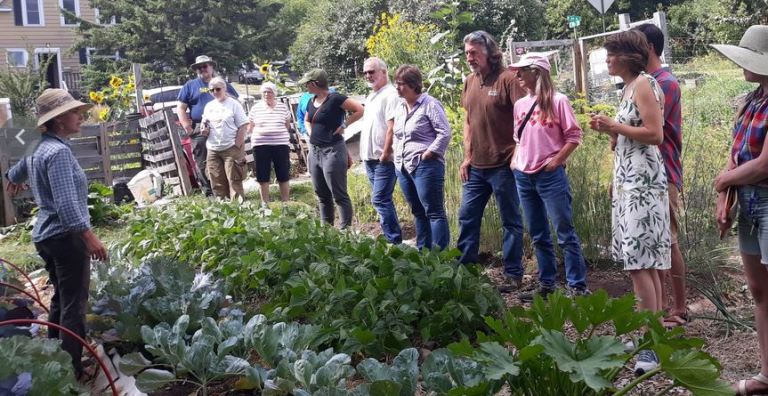 By targeting spatial planning entirely at people who aspire to a modest, community-based, self-sustaining way of life that combines gardening and housekeeping, local production and care tasks, a circular economy of proximity is really taking hold.

At the same time, many other problematic political issues are being tackled. This new kind of urbanism will slow down the deterioration of the climate, slow down the growth of energy demand, slow down the waste of resources, and improve biodiversity; yes, of course, but it will also: